Brentwood, Calif— The 31 year old Center Fielder, 5x All Star, 4x gold glover, 4x silver slugger, 1x MVP (3 other top 5 MVP finishes) hit .279 last year with 28 big flies (2nd most of his career) and 88 RBI’s. For a team that finished damn near historically last in RBI’s and HR’s, we need to pull the trigger. PULL IT BOBBY! He played very solid CF for his first 8 years. Bobby Rayburn comes to mind.

Last year, the 9th of his career, the once Flash Gordon of CF came down to Earth quite a bit. Dare I say he was below average in CF? Either way, he’s regressed a lot. Not quite Denard Span-bad but in the same ballpark. Cutch played 13 games at RF last year and albeit a small sample size, he was far superior in almost every defensive metric recorded. 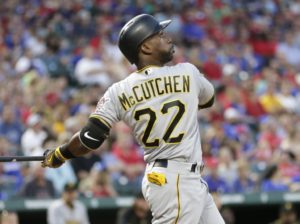 The Giants would almost certainly use him as a corner OF unless they don’t bring in a defensive CF which looks very unlikely at this point. Cutch’s salary contract: 1 year left, $14,500,000. Worst case scenario, we flip a mid to top prospect for him and can’t sign him to a 3-4 year deal at seasons end and he walks. But hey, he gives us a legit shot to contend this year and I think that’s what we’re all on board for. Our main core isn’t getting any younger and we have no time to rebuild. Unfortunately that means our farm system gets ravished.  But let’s turn a blind eye to that for now. $14.5M for a talent like Cutch in this market is a STEAL… Like top 10 in the league steal.

He has many quality years left and probably a few all star runs left in the tank, but at this point he’s a corner outfielder who can play CF when needed. This means we still need a rangy and fast captain of the outfield. All reports point to Billy Hamilton; I don’t hate it. He’s the fastest guy in the league in quite possibly the galaxy, best defensive CF by a large margin and the G-Men wouldn’t have to give up much to get him. Hit him 7-8th in the linup and let him eat up anything hit his way. On his way to 50 stolen bags. What’s not to like? Plus he’s cheaper than an off brand sports hat from your local gas station.

Other probable cheap options would be Jarrod Dyson or Cameron Maybin. With a swing and a miss in Ohtani and Stanton, the Giants have decided to stay cheap whether they wanted to or not. Next years free agent class is STACKED, with Bryce Harper leading the way. *Starts to drool thinking of Harper hitting 450 foot shots into McCovey Cove shattering kayaks and severing limbs*.

This trade is pretty clear to me. The Pirates will want one of our top 10 prospects for Cutch, as the Giants almost certainly will say yes to anyone not named Heliot Ramos. That probably leaves RP Shaw–He’s shown quality stuff but they have a small window with this aging core. Cutch, Posey and Longoria in the middle of the lineup? *Drooling*  Hands down the best middle of the lineup they’ve had in what? 8 years? Sorry, my memory chooses to forget all those 2-1, 1-0 nail bitters for 3 championship runs. Can you get PTSD from championships and good memories? Something to ask my shrink  about next Wednesday.

GM Bobby Evans, you’re on a VERY short leash. Shorter than the leash the bearded wonder Brian Wilson used to keep the Machine on. If our core pitchers perform how they did 2 years ago then we have the pitching, defense (assuming we sign a few key figures) and just enough bats to be a real problem. Not one team in this league wants the Bochy lead troops on a 3 man rotation starting with playoff immortal Madbum, Cueto, eh… and the Shark. He shows flashes of Greg Maddux at times and Solamon Torres at other times. That’s for a different blog.

Either way I’m very optimistic for the first time since the Cubs came back from approximately 80 runs in the 9th to beat the Giants and head to the NLCS in 2016.

P.S. Madbum, stay the hell off anything with a motor this off-season. Well, aside from that Chevy truck World Series gift, of course. That Chevy spokesman is still stuttering and sweating, poor guy. 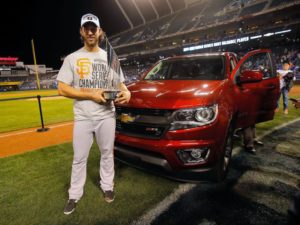